Once again, Leah Remini must resort to ancient history and fiction for her weekly dose of hate on her reality TV show, inviting the unvetted Mat Pesch to her roundtable of bigotry.

Pesch’s last position in the Church, which kicked him out 12 years ago, was working for over two years in the wood mill as the panel processor. Even so, Pesch was unable to uphold the ethical standards of the religious order and ecclesiastical justice removed him from even that low post. Prior to that Mat had held a position of Treasury Secretary where he was removed for dishonesty and falsifying records. Knowing that Remini would give him a free pass whatever he says, Pesch parlays a stint in the local bookkeeping department of a Scientology Church into financial expertise and experience he never had. But Remini never tells the true story about her subjects and guests. No, instead of the truth, she has Mat Pesch on the show to speak as a self-proclaimed “expert” on Church finances, when he is anything but.

Before being kicked out, Mat Pesch spent the majority of his time in the Church either in woodwork, renovations or construction jobs. Every time he was given duties with responsibilities broader than wielding a hammer, he failed. Mat joined the Church as a “pothead.” The Church attempted to help him but he never reformed.

Once again, Leah Remini must resort to ancient history and fiction for her weekly dose of hate on her reality TV show, inviting the unvetted Mat Pesch to her roundtable of bigotry.

Mat Pesch never held a position in Church management, nor in the Church’s Finance Office. Pesch began his Sea Organization career as a construction worker and never succeeded at anything beyond that. His first foray into administrative work ended in disgrace in 1983, with an internal Church justice body ordering that he was never to be given an executive position. The few times this edict was ignored, he failed miserably.

In 1988, Pesch was put in charge of the unit responsible for the upkeep and maintenance of properties in Clearwater, Florida. Here, too, he failed miserably. He was demoted back to his previous job of renovations, then demoted yet again. It was the same story time and again, anytime Mat was given a chance to do anything of any form of responsibility. The last time was not long before he was kicked out of the Church permanently. He was formally suspended from his duties for severe violations of Church policies. Pesch had falsified records to make it appear he accomplished an assignment, hiding his deception from local Church leaders.

As to the basis of his claim of expertise in Church finances, his tenure overseeing the bookkeeping department in Clearwater ended in dismal failure. His own affidavit signed in January 2005 states that he was “formally removed for ineffectiveness and because I allowed the division I was responsible for to contract in size.”

Pesch was expelled from the Church more than a decade ago.

Neither Remini nor her enablers at A&E like Nancy Dubuc ever bothered to check into Pesch’s track record of falsifying records, because she brags about not vetting any of her sources. A&E’s lawyers are perfectly fine that she doesn’t.

Neither Remini nor her enablers at A&E like Nancy Dubuc ever bothered to check into Pesch’s track record of falsifying records, because she brags about not vetting any of her sources.

Staff who worked with Pesch confirm his dishonesty, noting how he blatantly violated the financial policies of the Church and abused the trust he was given—including unauthorized purchases and falsifying the records. Morally, he was a failure as well. His first wife wrote that he terminated their 20-year marriage and started a relationship with another woman when she was out of town. Pesch even saw a lawyer to see if he could divorce her without her consent.

He and another Remini source, Amy Scobee, who was disciplined repeatedly for her sexual antics while she was with the Church, hooked up with each other when he was married to another. Scobee has a long and sordid history of repeated sexual transgressions and serial lying.

Moreover, Pesch and Scobee were supposed to be helping each other with spiritual counseling. Instead they committed one of the most serious transgressions within the Church—starting a sexual relationship with someone they were supposed to be ministering. After Pesch and Scobee were booted out of the Church, they resorted to selling refurbished furniture.

Since leaving the Church he has taken to inventing or embellishing stories about his experiences at Flag and bragging about his purported knowledge of Church finances in online ramblings. He’s a regular go-to source for hate blogger “Backpage” Tony Ortega, who earned that nickname defending and promoting the Backpage.com website that is a cesspool for child prostitution and human trafficking. At the time, it was the cash cow for “Backpage” Tony’s corporate bosses.

Scobee and Pesch also joined up with the cyberterrorist group Anonymous. In an online rant, Pesch proclaims that members of the cyberterrorist group “were KEY in motivating Amy and I.” Keep in mind this “motivating” hate group is the same crowd that subjected Church members to death threats, bomb threats and fake anthrax mail and which law enforcement worldwide has charged with numerous cyberattacks or cybercrimes.

But Remini doesn’t care that her sources have no credibility and have numerous skeletons in the closet. If they can help her spread hate, truth and character does not matter.

When he isn’t pontificating about “disunification cosmology” or lying in court, Jeffrey Augustine is spreading hate and bigotry.

What does it say about Leah Remini and A&E that her reality TV show features as an “expert” on religion someone who incoherently pontificates about “bubble universes” as the result of a hallucination in which he claims to have divined the secrets of the universe and who a judge in a civil case repeatedly called out for lying.

What does it say about Leah Remini and A&E that her reality TV show features as an “expert” on religion someone who incoherently pontificates about “bubble universes” as the result of a hallucination in which he claims to have divined the secrets of the universe?

Jeffrey Augustine is just another unhinged zealot marching in Remini’s parade of unvetted, discredited sources. Augustine claims to be a “researcher” but would more accurately be described as a conspiracy nut. Augustine is no more a “researcher” or an “expert” than an unemployed Internet troll camped out at the nearby Starbucks. He runs his own religious hate website and posts obsessively on the Internet using numerous pseudonyms so he can have conversations literally with himself. His postings show he’s just another fringe hatemonger of Remini’s, obsessed with the leader of the Church—a man Augustine has never met, calling him a “gay male prostitute by night,” “douchebag,” “a pussy,” “a coddled butt hurt narcissist” and “a creepy space alien who is pretending to be a human.” Hardly the words of a credible “researcher.”

Augustine’s credentials as a wack job speak for themselves: He wrote a self-published book, What Caused the Big Bang? where he aggressively promotes his crackpot theory, “Disunification Cosmology.” Here’s a juicy sample from his description:

“One day on a drive into the mountains, Augustine was hit with a bolt out of the blue. He had a staggering insight about the event that caused the Big Bang and its implications for human Consciousness. Augustine had what he describes as a ‘massive download from Infinity’ wherein he saw everything. It took a long time to unfold this download and put it into book form. Along the way, Augustine became a Master Mason and a Knight Templar.”

“This image I created is called ’Bubble Universes’ and is meant to convey the sense that bubble universes are finite whereas the Infinity in which they stand is Infinite. Thus, all sub-infinite universes arise from Infinity and collapse back into Infinity. There is a reason why Infinity causes subinfinite universes to arise and I explain that in my book.”

He also writes about “psychic architecture” and the “origin of the universe,” displaying Masonic imagery on his website. Augustine also claims in his resumé, with zero substantiation, to have worked on classified projects involving nuclear-capable guided missiles.

Not that Remini and A&E’s enablers led by Nancy Dubuc care. Remini has boasted that she doesn’t vet her sources, and that A&E’s legal department is just fine with that. So a wingnut liar should easily pass their smell test with flying colors.

The truth about Augustine and his wife, Karen de la Carriere (a woman kicked out of the religious order three decades ago and expelled from the religion when she reverted to the “world’s oldest profession” under the cover name “Snow Suzy”) were exposed as liars by no less than a Los Angeles County Superior Court Judge. In a 2015 decision unrelated to the Church, Judge Michael Johnson referred to the couple as “not credible” more than half a dozen times, as in, “The testimony by Carriere and her husband Jeffrey Augustine …[referring to this case] is not credible.

In a 2015 decision unrelated to the Church, Judge Michael Johnson referred to Jeffrey Augustine and Karen de la Carriere as “not credible” more than half a dozen times.

De la Carriere had sued her accountant, William Greene, claiming that a 2003 Promissory Note and Trust Deed that Greene held on her house was a forgery and demanded clear title to her house. Greene filed a cross complaint.

Judge Johnson not only ruled in favor of Greene, he found that de la Carriere’s claim that the 2003 document was a forgery was false, and that she had had the document notarized.

Augustine first began posting on anti-religious hate sites under the pseudonym of “J. Swift” at the end of April 2005. He claimed that he left Scientology several years earlier, and that he was a lifetime member of the International Association of Scientologists. Every bit of that is a lie. In fact, Jeffrey Augustine has never been a Scientologist. He is simply a former light bulb salesman who claims to have lost his faith in Christianity when he was studying to become a minister. He also claims to have insight into the event that caused the Big Bang, to have been a Zen Buddhist, a Master Freemason and a Knight Templar. Augustine says he was summoned to Masonry in 2002 by two mysterious and compelling dreams.

In 2008, Augustine joined up with the cyberterrorist group Anonymous, even dragging his son with him to the Anonymous “pickets” to harass Church parishioners. In 2011, his first wife of 20 years filed for divorce. That’s when Augustine hooked up with the equally unhinged de la Carriere.

Augustine’s wife de la Carriere is another hatemonger who once worked as a casino croupier at a gentleman’s club and as a call girl, admitting later in a self-written life history that during that time she had one-night stands with as many as 50 men. She also engaged in a long-term arrangement with a married British parliamentary advisor. She was set up with a posh apartment, expensive clothing and a large allowance, to be available on call whenever her services were needed.

Well into her 50s when she left the Church back in the 1990s, de la Carriere returned to her roots to support herself, even sending email solicitations to potential “johns” under the name “Snow Suzy” complete with price lists and photographs. De la Carriere has used 13 different aliases.

Now, de la Carriere and Augustine post bizarre rants about the Church under different pseudonyms while peddling stories to tabloids. That makes them a perfect fit with Remini’s exclusive club of unvetted, discredited sources spreading hate on A&E. 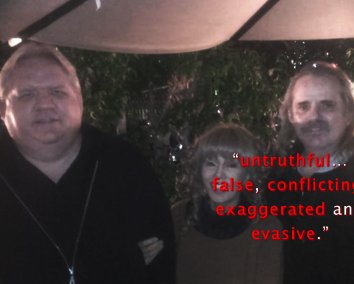 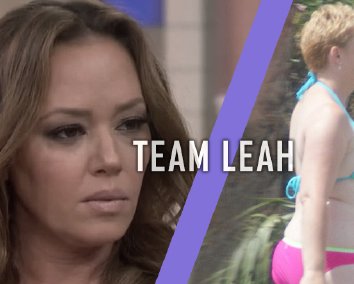