Leave it to Leah Remini and A&E to distort the truth when the facts are staring them in the face. Once again, Remini uses her “people”—“unvetted” guests, each with criminal records and histories of lying, similar to the rest of Remini’s lying sources.

Once again, Remini uses her “people”—“unvetted” guests, each with criminal records and histories of lying, similar to the rest of Remini’s lying sources.

In her latest televised exercise in religious bigotry, Remini once again rewrites a history she has no knowledge of to shade the truth, this time by creating the false impression that a ranch for troubled youths that has been closed for 15 years was part of the Church. It doesn’t matter to Remini and her enablers at A&E—led by CEO Nancy Dubuc—that the Church had no role at the Ranch or that Remini’s sources have criminal records and histories of blatant dishonesty.

That’s because from the beginning, the modus operandi of Leah Remini, co-host Mike Rinder and A&E’s Dubuc has been to invent “victims” by creating embellished and fabricated testimonials from years, if not decades, ago in order to vilify the Church using whatever tenuous connection they can find. Remini even boasts that she doesn’t vet her sources or shows. Remini said, “so there is NO VETTING. I take their word for it.” When asked if Legal lets her get away with it, Remini was outraged by the question: “Well, they have to. Because they are my people.”

That’s because from the beginning, the modus operandi of Leah Remini, co-host Mike Rinder, and A&E’s Dubuc has been to invent “victims” by creating embellished and fabricated testimonials from years, if not decades, ago in order to vilify the Church using whatever tenuous connection they can find.

In this case, “my people” are two individuals with criminal histories and records of lying that go back years and decades. Events that purportedly took place 20 years ago—if at all—are dishonestly made to appear as if they happened yesterday. What’s more, Remini’s goal is to blame the Church for every problem and issue individuals are dealing with today even when they have had no connection to the Church for decades.

The actual history of the Mace-Kingsley ranch was that it was started by two Scientology parishioners seeking a way to use Scientology study techniques to help at-risk youths, inspired by a couple desperate to find solutions for their 16-year-old son facing jail time. Virtually all the students had been immersed in gang activity, drugs, sexual promiscuity. Loving family members wanted to step in to try to help them salvage their lives.

The program’s goal was to help troubled, at-risk youths turn their lives around. Former school officials estimate that 8 out of 10 students overcame their drug addictions and criminal tendencies. Naturally, Remini and Rinder didn’t speak to any of them, but focused on two who continued to have troubles, Tara Reile and Nathan Rich, because the entire goal of the reality TV show is to blame their former religion and to further spread hate.

From an early age, Tara put her family through hell, according to her uncle, Chris Reile. As he tells it, she smoked marijuana and used other drugs as a girl, and was involved in petty theft. He recounts that at age 12 she stole her grandmother’s car. She was headed for juvenile hall with no future when he took pity on his brother’s family, loaning them the money to send her to a ranch where she could possibly get help. Tara was sent to the ranch for drug use, violence, rebellion and promiscuity.

Tara’s aunt Meg and her uncle Chris were asked if she complained about conditions at the ranch after she returned. Both said they never heard her say anything negative about her experiences there. In addition, Carol Kingsley said she spoke to Tara after Tara finished the program and that she spoke well of the ranch. Both the aunt and uncle spoke of Tara’s inherent dishonesty and inability to tell the truth, and referred to her as pure terror and trouble.

Sadly, after she left the ranch Tara reverted to her troubled lifestyle, which included being rushed to a hospital by ambulance after apparent suicide attempts with drugs, slashing her wrists and taking a string of psychiatric drugs. In February 2013, Tara was charged and found guilty of drug possession. Later that year, in October, Tara was arrested and booked on charges of domestic violence by the Sylvania Police Department in Ohio. Both aunt and uncle refer to Tara as “a pathological liar.”

Both aunt and uncle refer to Tara as “a pathological liar.”

When her uncle Chris talked to Tara just last month, she admitted she was a difficult teenager and that she learned to have an excellent work ethic from the ranch. Her uncle Chris asked her why she didn’t say anything for 20 years about these complaints, and she couldn’t answer him. That is because with Tara there was always another agenda—something in it for her. Her aunt and uncle know she is lying on TV for some opportunity unstated, whether A&E is paying her, giving her perks or simply 15 minutes of fame, there is no good in her behavior. Never was and never will be.

Nathan Rich was sent to the Mace-Kingsley ranch for troublesome kids in New Mexico in late 1996 by his family because he was falling into a life of crime. At age 11 Nathan was arrested for shoplifting with another child after they stole items from seven stores. His mother received a call from the local police department, informing her that they had arrested him for shoplifting, and that Nathan showed no remorse. By age 14 he had fallen in with a crowd of youths who drank and took drugs. He also had another shoplifting arrest.

According to those who knew him, Nathan responded to the Ranch program and improved. Carol Kingsley remembered working with Nathan for many hours one-on-one, attempting to help him sort out his life. She recalls he was thrilled when she taught him to ride a horse. Nathan’s aunt Sharon recalled attending his graduation from the ranch program in 1999, and how excited he was for the whole family to see him graduate. She said that he looked great, was helping other kids, and was developing into a leader. She recalls their pride in his accomplishments, only to see his progress vanish after graduation when he once again got into drugs and stealing.

Nathan was arrested in 1999 for theft from a supermarket. When he was searched by the police, he was found to be sniffing nitrous oxide from cans, carrying a drug pipe and a set of brass knuckles. Still under 18, the officer told his mother he would be sent to a Juvenile Acceptance Center.

Nathan was arrested for at least five misdemeanors or felonies in New Mexico, including criminal damage to property, trespassing, drinking in public as well as possession of heroin and drug paraphernalia. He pleaded guilty to heroin possession and one other charge. The court deferred prosecution pending completion of 18 months’ probation.

Nathan then left home with no warning to his family, and thereafter he didn’t speak to any family members, apart from a few brief communications with his mother. No one else from the family heard from him until 2007 when he started posting on the Internet wild stories about growing up. During that time, Nathan was arrested for at least five misdemeanors or felonies in New Mexico, including criminal damage to property, trespassing, drinking in public as well as possession of heroin and drug paraphernalia. He pleaded guilty to heroin possession and one other charge. The court deferred prosecution pending completion of 18 months’ probation.

In May 2007, his aunt, Sharon Rich, met with Nathan in Seattle. Over several days, Nathan told his aunt how much he regretted his drug use. Nathan’s mother, Julie Rich, who passed away in August 2010, loved her son and tried to help him, but there were times she feared him due to his erratic behavior and drug use. At one point, according to Sharon and Arlene, Nathan’s aunts, Nathan was so out of control using drugs that his mother told her lawyer and the police that she feared for her life. Like Tara’s family, Nathan’s family sent him to the ranch to help him become a better person. It was a place for wayward and criminal kids to reform.

Virtually all the students had been immersed in gang activity, drugs, sexual promiscuity. Loving family members wanted to step in to try to help them salvage their lives.

The ranch program consisted of academics, teaching team work, one-on-one ethics counseling, caring for the environment, wilderness survival training, planning of future goals and family relationships. The New Mexico facility was on two locations on 18,000 acres in the middle of the Gila Wilderness, and included livestock facilities, an indoor riding arena, stalls and paddocks for the horses.

Founder Carol Kingsley showed concern for students, acting promptly if she discovered anything inappropriate. Notably, more than 25 years ago, she removed an individual Remini and Rinder now focus on. The man also was kicked out of the Church at the time.

Remini and Rinder’s Mace-Kingsley episode is another example of dishonesty enabled by A&E. Viewers never get the truth or complete picture, because the goal is to exploit individuals, disparage families and distort the facts to spread hate. 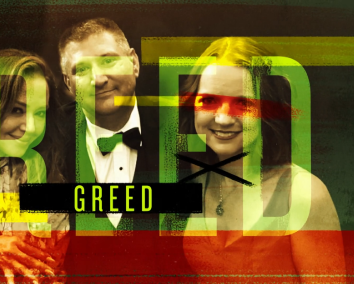