Leah Remini proclaimed in a 2014 BuzzFeed interview that “I don’t want to be known as this bitter, ex-Scientologist.”

Not only has she become exactly that by failing to move on with her life, Remini’s anti-Scientology shtick is the dead horse she keeps beating in a desperate attempt to stay relevant.

Remini made her highly publicized “exit” from the Church of Scientology in July 2013 via a story leaked to the supermarket tabloids. Her career at the time was already in free-fall, plunging at an increasingly faster pace.

Now she exploits her former religion to further her career since even as a chair on Match Game, she failed and was voted not to return because of her “disruption” and “terrible answers.”

How Remini Befriends Bullies and Launches her Harassment Campaign

It hardly seems a coincidence that Remini’s troubles were mounting as she drifted from and eventually was kicked out of the Church. She began cozying up to the usual handful of crazed anti-Scientology zealots lurking on the Internet fringe. She also was on the verge of being expelled from the Church for refusing to abide by its high ethical standards and began spying for these bullies.

After her tabloid-orchestrated departure announcement, Remini’s first move was to file a false “missing persons” report in August 2013 to harass the wife of the leader of the religion. It was part of a harassment campaign cooked up with bullies Mike Rinder, Marc and Claire Headley and Tony Ortega. Remini used an acquaintance of hers in the LAPD to personally file the report, which she quickly leaked to the media. But it all blew up in her face when the LAPD took the extraordinary step of thoroughly debunking to the media Remini’s absurd claim within hours, calling it “unfounded.” Remini wasted valuable public resources in an attempt to viciously harass the Church leader’s wife, whom Ms. Remini has obsessively stalked.

Within hours, what had been a gloating Remini turned red-faced with embarrassment when the LAPD closed the case. Unable to admit or accept she was wrong, Remini continues unsuccessfully to try to spread her myth. There is no goodwill in her actions. Her false reports have nothing to do with a big heart. They have to do with the burning resentment usually only found in a cast aside, vindictive and bitter ex-wife.

Within hours, what had been a gloating Remini turned red-faced with embarrassment when the LAPD closed the case.

How Leah Remini Viciously Breaks Up a Family

Remini’s dishonesty and disregard for others is a matter of public record. In 1997, she launched a secretive extramarital affair with a married man (and father of a 4-year-old son), Angelo Pagan. When Pagan’s wife at the time, Raquel, found out, she took her story to the Star, claiming that Remini had “coldheartedly wooed her husband” and “didn’t care about destroying a family.”

Leah tried to destroy Angelo’s ex-wife as she always does with her imagined “opponents”.

Raquel was not the only ex-wife Leah tried to destroy. Elaine Aviles, the mother of two of Pagan’s sons, found herself cut off from her sons by Pagan and Remini. An affidavit filed in the Angelo-Raquel divorce case reveals the unethical behavior Remini exhibited in private. Elaine stated that Remini had shouted profanity and insults against her, and went so far as to tell Elaine she was going to make sure she did not see her older son again.

“…it was used by Angelo and Ms. Remini as a revenge, for taking Angelo to court… They begun to prevent me from any contact with my son. Ms. Remini even interrupted a private conversation I had with my son Alex by phone. She began to shout out profanity and insults against not only me but also against Angelo’s ex-wife, Raquel. She went as far as to tell me that she was going to make sure that I did not speak with my son Alex and that she would make sure I would not see him again.”

The Remini-caused splintering of Pagan’s family, along with her threats and efforts to keep the mother of Pagan’s children from seeing them, exposes Remini as a phony. This callous attitude is typical of Remini’s treatment of family members.

How Leah Remini Callously Treats Her Own Family

In January 2014, National Enquirer ran a story about Leah Remini snubbing another of her sisters, who was dying. Remini’s stepmother, Donna Fiore was quoted in the article as stating, “Leah turned her back on Stephanie while she was dying, and I am furious about it!” It adds that Remini “ignored Stephanie’s pleas for help” before Stephanie died on New Year’s Eve.

“Leah turned her back on Stephanie while she was dying…”

Years earlier, her own father wrote that Remini had refused to loan him $1,200 to pay for a CAT scan during a cancer scare. He also stated that he called her three times to wish her happy Thanksgiving, and that each time she was too busy to take the call.

As her estranged father stated, “You are still the same person you were in Brooklyn. Except you have money and a home, you’re still a self-centered bitch. Everyone around you knows that but because their survival depends on you they really don’t say what’s really on their mind.”

Likewise, Remini’s stepfather, George Marshall, has discussed at length problems Remini has with family members. In July 2012 he wrote, “Leah’s sister (younger) Shannon was in tears 3 weeks ago … she was talking about how hard it was working for Leah lately. How critical she was about her work in the house office … In the last 3 months she has fired her mother at least twice. Vicki has quit her post 2 or 3 times because of her critical argument over house things… Shannon has been fired a few times.”

In the same report Marshall states, “Angelo has said a few times [in] the past 4 months she doesn’t want to be married anymore to him.”

In March 1999, Remini was sued by her then-managers, Handprint Entertainment, because she refused to pay them their 10 percent commission. Handprint claimed it played a critical role in landing her the six-season deal to star in King of Queens. The case was settled in September 2000.

In 2003-2004, Remini also was involved in a lengthy dispute with her former business manager, with whom Remini had broken her contract. The two battled for months in arbitration until it was finally resolved in April 2004, with the arbitrator concluding that the former manager had not violated any rules and that he should be compensated by Remini for 13 of the 26 episodes of the 2001 season of King of Queens. Remini also paid him a settlement amount for breaking the contract.

In February 2002, this former manager wrote about Remini hurting her career through her self-destructive behavior: “While working through a long renegotiation of Leah’s television deal, the producer of her show … stated that her overall negative attitude and general negative manner was one of the reasons he felt she did not deserve a certain compensation package… Leah is on her fourth publicist in a year and is having problems with her current publicist after only three months of working together. Leah has been very antagonistic and fault-finding with all of them in turn.”

“Leah is on her fourth publicist in a year and is having problems with her current publicist after only three months of working together. Leah has been very antagonistic and fault-finding with all of them in turn.”

Remini’s brief job as one of the hosts of The Talk ended in acrimony in 2010, with co-host Sharon Osbourne publicly complaining about Remini’s “negative, unprofessional and childish behavior.”

Hate and anger are embedded in her personality, which is always seeking to be at “war” with someone or something. This attitude is something the Church was continually trying to help Leah with.

How Leah Remini Doesn’t get Along with Others

The wild allegations that Remini now serves up to the media about Scientology to get attention come as no surprise to Scientologists who knew her.

“Since she was 14, this was a person that always had to be involved in wars,” said one former friend who has known her since childhood. “There was never a period of time when Leah was having a calm life. It was always huge dramatic outbursts against people.”

“I don’t get along with others” was a common Remini refrain.

When Remini was unwilling to reform, mend her behavior and become a better person, she began to spread discontent and malicious rumors and lies about individuals in the Church who tried to help her, while refusing to raise her own ethical standards.

Still, Church of Scientology staff continued to work with Remini to help her sort things out. They saw firsthand how demeaning and arrogantly she treated others. In describing what it was like to work with her, one person said:

“In working with Leah, what struck me as most difficult is how she treated her subordinates. Her description of them or their lack of efficiency in serving her needs was followed with a vulgar description of their ability or inabilities or their shortcomings… Her mother also worked for her and she would constantly complain how she was not doing her job adequately. This was a common threat to those that worked under her charge, and she was quite vocal about this and speaking in vulgar, degrading statements how they are incompetent…”

They saw firsthand how demeaning and arrogantly she treated others.

While the self-absorbed Remini treats her break with the Church as one of the most significant historical events of the last 500 years, her former friends can barely even greet it with a yawn.

“Nobody cared,” said one former friend. “Leah was never a headline story. She was never an international superstar. She didn’t make the headlines of anything until she started attacking a social betterment group, which was the Church that she was once a part of. It’s getting old.”

Added another former friend who has known Remini since childhood: “She wanted to be the Church of Leah and she wanted everything about her. And if it didn’t go her way, she would lose her mind. No one cared that Leah left the Church. People were like, ‘Good riddance. You’re kind of mean.’ Done. Great. Finished. Goodbye. There was no ‘escaping the Church.’ It’s like, ‘You don’t want to be a Scientologist? Goodbye.’” 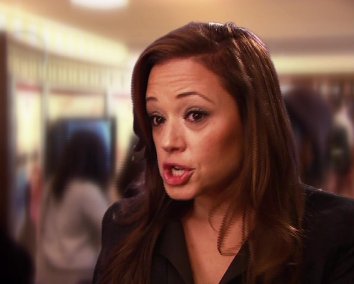 Up Close and Personal: Why Leah Remini Doesn’t Play Well With Others