Those who have been in Leah Remini’s orbit and seen how she is up close know that behind the glossy smile is a nasty, foul-mouthed individual consumed with pettiness and vindictiveness.

Even those who once considered her a friend have felt the brunt of her rants. Her outbursts especially intensified as her skin became noticeably thinner after the hit show The King of Queens left the air in 2008 and she was no longer working.

Remini’s brief job as one of the hosts of The Talk ended in acrimony in 2010, with co-host Sharon Osbourne publicly complaining about Remini’s “negative, unprofessional and childish behavior.” In 2012, a Family Tools sitcom that paid her $100,000 an episode was scorched by critics, with just two of the 10 shows shot actually airing before it was canceled.

Hate and anger are embedded in her personality, which is always seeking to be at “war” with someone or something.

Former close friends of Remini take her complaints and hostility toward the Church that began in 2013 with a huge grain of salt. Knowing Remini as they do, they note that hate and anger are embedded in her personality, which is always seeking to be at “war” with someone or something.

“Since she was 14, this was a person that always had to be involved in wars,” said one former friend who has known her since childhood. “There was never a period of time when Leah was having like a calm life. It was always huge dramatic outbursts against people.”

“None of this has to do with Scientology,” her former friend said. “This is Leah—having nothing to do with the religion. This is just how she treated people. She was always engaged in wars: ex-boyfriends, agents, people she worked with, co-stars—wars, battles, big drama.”

Exacerbating Remini’s abrasive attitude was her decision to befriend a handful of anti-Scientology misfits lurking on the internet fringe. Unable to move on with their lives and make a living, they have remained bitter for years, even decades, after being kicked out of the Church. Now Leah Remini is a member of the same club of bitter malcontents who are obsessed 24/7 with hate.

What some friends find especially hypocritical is Remini’s false claim that her friends have been pressured into not speaking with her when, in fact, it was Remini who cut off her ties to them.

Said one friend who knew Remini well: “What Leah is doing right now isn't so shocking to me. I actually started seeing some behaviors that I really kind of was like, “’Whoa, this is not a nice person.’”

What some friends find especially hypocritical is Remini’s false claim that her friends have been pressured into not speaking with her when, in fact, it was Remini who cut off her ties to them.

“She’s the one that disconnected from people all the time,” former friend Stacy Francis said. “She would change her number all the time. Every time, as soon as she got upset with somebody she wouldn’t talk to them anymore. This was her way. This was her modus operandi. So now she’s trying to flip it to make herself the victim.”

“She disparages black people … she basically feels like she’s the queen of the world.”

Ms. Francis, who is African American, said that Remini also would say disparaging things about people of color, even referring to Ms. Francis’ child as a “niglet.”

Another former acquaintance recalls seeing Remini’s wrath up close on a Hollywood set when the actress had a major blowup with a director. “She was acting very mean and pretty awful,” actress Shannon Burwell said. “And they actually had to shut the set down for at least an hour.”

Ms. Burwell also recalled that Remini at one point even belittled a makeup artist saying, “Do I have to stick my hand up your ----- to get a rise out of you?”

She continued: “You could always tell that there was a dark side that would sometimes pop up,” and that Remini had a very thick mean streak, often chuckling with delight when tabloids printed harmful gossip about her friends and people she knew.

One former friend who has known her since childhood said that her obsessing with attacking her former religion reveals the real Remini: a spiteful, angry and self-loathing individual who directs her hate toward others.

“This is really nothing more than bullying or bigotry or hate-speech,” the former friend said. “And you know, the thing about Leah attacking Scientology, there’s really no difference than someone that’s attacking blacks or Jews or gays, this is what people do. Haters hate. And they always feel justified in their hate and they always fabricate stories to justify their hate. Hate is hate. Leah is a hater. She’s been a hater since she was 14.”

“This is really nothing more than bullying or bigotry or hate-speech.”

Those who know Remini well are convinced that her anti-Scientology rants are just a way for her to get attention and stay in the limelight.

“I’d say it’s the attention that is spurring this on—‘Look at me! Look at me!’ And keep the eyeballs on her,” said another former friend.

The friend added that Remini knows she can be nasty and mean, and that Scientology was helping her to be a nicer person and more at peace with herself. Now, with Remini deciding to befriend those attacking the Church, hate has become her new calling card.

Leah Remini on The Talk before she was fired

Remini knows she can be nasty and mean, and that Scientology was helping her to be a nicer person. 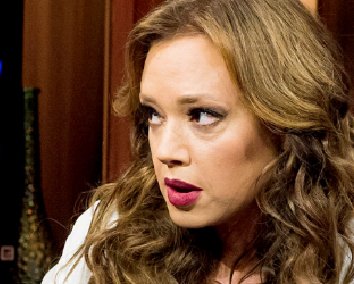 A Hater at Heart With $$$ on Her Mind