Look beyond Leah Remini’s pious, money-motivated self-righteousness to find someone inspiring others to hate. Go down the list of what this sitcom actress’s program incites: vandalism—check. Desecration of a religious symbol—check. Arson of a church—check. Threatening the lives of parishioners and their children—check. Threatened assassination of a religious leader—double check.

And when one of her “fans” makes serious trouble that escalates into violence, Remini is eerily silent. No tweets referring to the fan as “honey.” No Instagram posts. Nothing condemning those who threaten lives and commit violence, carrying out hate crimes against her former Church, its ecclesiastical leader and even its parishioners—people she once called friends.

… when one of her “fans” makes serious trouble that escalates into violence, Remini is eerily silent… Nothing condemning those who threaten lives and commit violence, carrying out hate crimes against her former Church, its ecclesiastical leader and even its parishioners—people she once called friends.

All told, Remini’s show has created an onslaught of over 500 incidents of vandalism, hate, threats of death or violence to the Church leader, clergy or parishioners, many of which directly reference her bigoted show.

Within an hour of the debut of Leah Remini’s second season, the Church received threats like these:

“You are dead. I’m going to murder all of you pig cult bastards and blow up all your buildings. You are f***ed.”

“All Churches are going to be gone all every as***le Scientologist dead.”

Law enforcement is also looking into another stalker for threats against the leader of the Church intending to use a gun and “exercise our 2nd Amendment rights.”

Other examples of threats on the Church’s leader: “I hope he burns in a house fire,” and “I’m gonna assassinate” him and “Literally gonna torch down every scientology center.”

One online posting from Georgia read, “You should all kill yourselves. Or come to my neighborhood and let me do it for you.” Included were photos of his assault rifle. The Pike County (Ga.) Sheriff’s Office described the posting as a “terrorist threat via computer.”

The hate directed at the Church is based solely on the lies in Remini’s show, as evidenced by the fact that the same lies are repeated in the tweets, emails and postings, usually with the hashtag for Remini’s show.

One anonymous poster praised A&E and stated, “Come to my house to meet my 9mm glock.”

“Come to my house to meet my 9mm glock.”

In Tampa, a man tore the cross off the Church.

In Minneapolis/St. Paul, a man entered the Church while parishioners were attending service and started a fire in the bookstore. The man was arrested for arson. Luckily, no one was injured.

Yet Remini and her co-producers don’t care. They callously continue to sensationalize their anti-religious hate propaganda in their search for better ratings.

Another is Brandon Reisdorf, an unhinged individual who threw a hammer through the plate glass window of our U.S. headquarters building and threatened to assassinate the Church leader. He was stirred up by Leah Remini and Mike Rinder, while Remini was appearing on a television program with Reisdorf’s mother.

Reisdorf was placed under mandatory mental health supervision because of his irrational conduct and threats to kill the leader of the Church. California law requires mental health officials to issue a Tarasoff report when a patient intends to harm an individual—in this case Mr. Miscavige.

The man was subsequently arrested and convicted of felony vandalism of a Church and the authorities issued a Criminal Protective Order to protect the Church leader and all Scientology Church facilities in Southern California.

YET AFTER he was convicted of a felony for these crimes incited by Remini—with Remini knowing full well the crime committed, the conviction, the man’s threats, and his ability to carry them out—she brought him on her show and, rather than condemn his actions, Remini praised him!

How can someone excuse the behavior of a convicted felon for these actions? The answer is simple: hate and violence is what Remini’s Aftermath instigates and she preys on mentally unhinged individuals to carry out these and similar actions.

Considering his actions and threat, who was to know whether he would attempt to carry through with his threats?

Yet this is not the first time potentially dangerous individuals have been inspired by Leah Remini. Take Erin McMurtry, a gushing Leah Remini fan on social media from Texas who smashed her car through the front of the Church of Scientology of Austin. McMurtry plowed across the lobby before coming to a stop just short of a nursery.

It was a miracle that no one was injured or killed, and it was only a stroke of luck that the nursery was empty. Tracked down by police, McMurtry admitted to the crime and ranted about Scientology, including false claims made by Remini, as she had never previously had a single dealing with Scientology. When informed that no one was injured, McMurtry responded, “that’s too bad.” McMurtry was convicted of criminal mischief of a place of worship.

Leading up to her violent outburst, McMurtry was one of Remini’s biggest cheerleaders on social media in postings that grew increasingly strident and angry.

Leading up to her violent crime, McMurtry was one of Remini’s biggest cheerleaders on social media in postings that grew increasingly strident and angry:

“Thank you so much for speaking up Leah Remini!!!”

…and “Leah Remini is a true inspiration!!”

So when a disturbed fan like McMurtry resorts to violence against the Church—violence that could have killed parishioners or their children—what is Leah Remini’s reaction? Silence on the incident. And spreading more anti-religious hate.

Sadly, it doesn’t stop with McMurtry. A Chicago man, Andre Barkanov, pleaded guilty to threatening to assassinate the leader of the Church.

In an interview with Los Angeles Police detectives, Barkanov stated that his view of the Church was shaped by, among others, “that King of Queens lady,” referring to the former TV sitcom that remains Remini’s best-known role.

In an interview with Los Angeles Police detectives, Barkanov stated that his view of the Church was shaped by, among others, “that King of Queens lady,” referring to the former TV sitcom that remains Remini’s best-known role. Barkanov told detectives he had seen Remini on television promoting her book.

Barkanov was arrested by the LAPD after a call was traced to him that a Church receptionist described to authorities in a letter. She wrote, “The man was calm, collected and almost businesslike in the way he conveyed the threat to Mr. Miscavige, myself, my family, our staff and parishioners. It can only be described as chilling, as it was cold, calculating and methodical.”

She further wrote, “From the minute that first call came in, I was convinced that I faced potential danger as did Mr. Miscavige, my colleagues and fellow Scientologists… He threatened me personally, as well as my family’s safety. I was afraid.”

Likewise, another Church official wrote to authorities that Barkanov’s voice “was menacing and hostile, clear in his intentions. What was frightening was I had no idea where this person was calling from. For all I knew he could have been across the street.”

The Church official added: “Before this, I would sometimes take walks in the neighborhood around our offices, and stopped out of fear. While I am reassured by the increase in our security, you never get over it… People should not have to live in fear of bigotry and hate.”

Leah Remini proclaimed in a 2014 BuzzFeed interview that “I don’t want to be known as this bitter, ex-Scientologist.”

Now that she is known for only that, one would think Remini would feel a responsibility to refrain from hate speech that could cause violence and to condemn those who are incited by her words to commit violent acts endangering others. 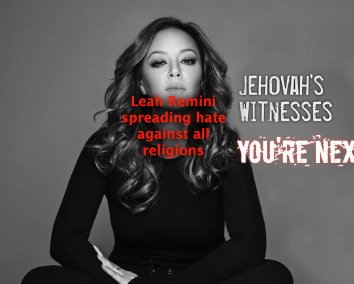